If it ain’t broke, don’t fix it. The proverb has been part of BMW’s product lifecycle philosophy for decades. Most of BMW’s facelifted models received mild design upgrades, with the occasional exceptions to the rule. One of those exceptions is the 2023 BMW BMW M340i Facelift. The redesigned M-lite 3 Series was unveiled in May 2022 and it is now landing in customers’ hands. But ahead of the market launch, we flew to Germany to sample the car and its glorious B58 engine.

Small, but Meaningful Upgrades on the Outside 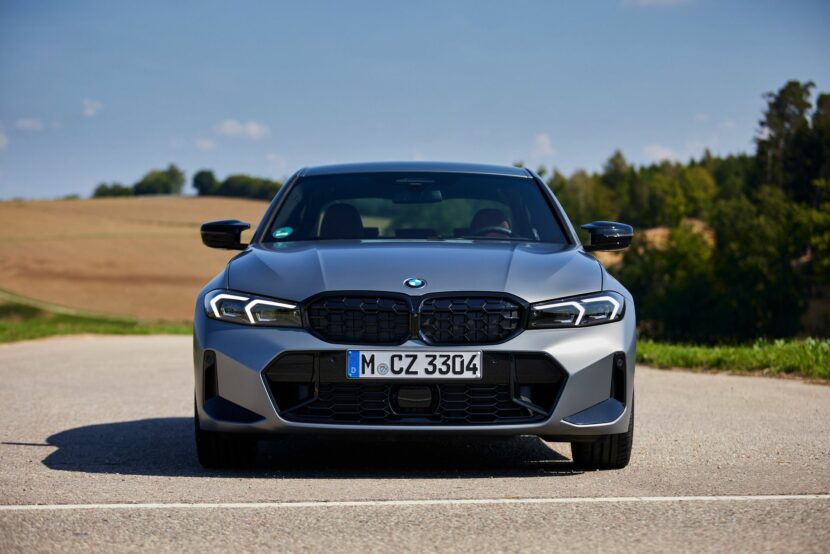 For the last few years, the 3 Series has remained among the last bastions of normalcy in BMW’s designs. While so many of BMW’s cars featured large grilles and complex shapes, the G20 BMW 3 Series remained a simple, sporty, and handsome-looking car. But how do you improve an already beloved design? By keeping it simple, at least on the outside. The kidney grille retains the same size, but the outer edges are thicker giving the car a shark-like nose. The headlights are slightly slimmer, retaining their overall shape but with new graphics which now resemble a 5 Series more than ever before. The laser lights option is gone, but the Adaptive LEDs get blue or black stripes inside, somewhat retaining the unique look of the lasers. 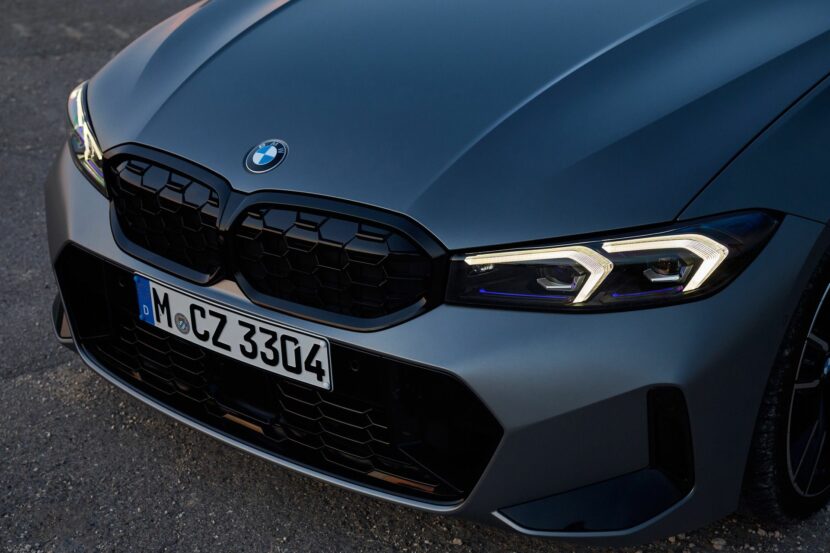 Beneath the new grille and headlights, larger air intakes replace the old, smaller ones. This is probably the largest area of improvement. The shapes are also simpler and cleaner while the honeycomb air intake makes the M340i look sportier. Also, the gap between the kidney grille and the top edge of the front bumper has been reduced in size to emphasize that shark nose. Out back, the M340i’s taillights remain the same, but the rear bumper and diffuser are different. What’s even more interesting is that most new M Performance models have received quad exhaust pipes, but the new BMW M340i does not. Instead, it sticks with the trapezoidal standard exhaust, which is more traditional. The exhaust pipes inside are also larger than on the outgoing model, ranging from 90 to 100 mm. 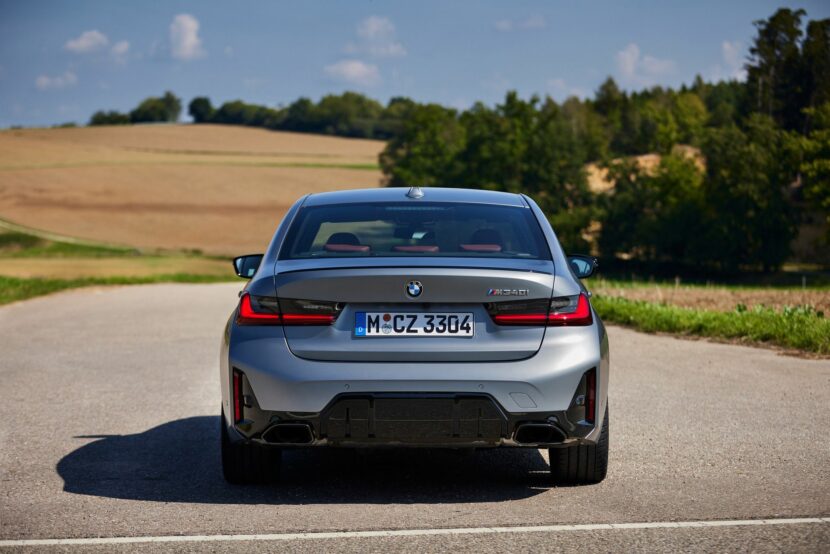 Now if you add the M Sport Pro Package, the 2023 BMW M340i gets a black trim, black chrome exhaust tips, M Sport brakes with red calipers, a rear trunk spoiler, and even blue accents inside the adaptive headlights. To bring the M-lite even closer to the M3, a carbon fiber roof is offered as well.

Significant Changes Inside The Cabin 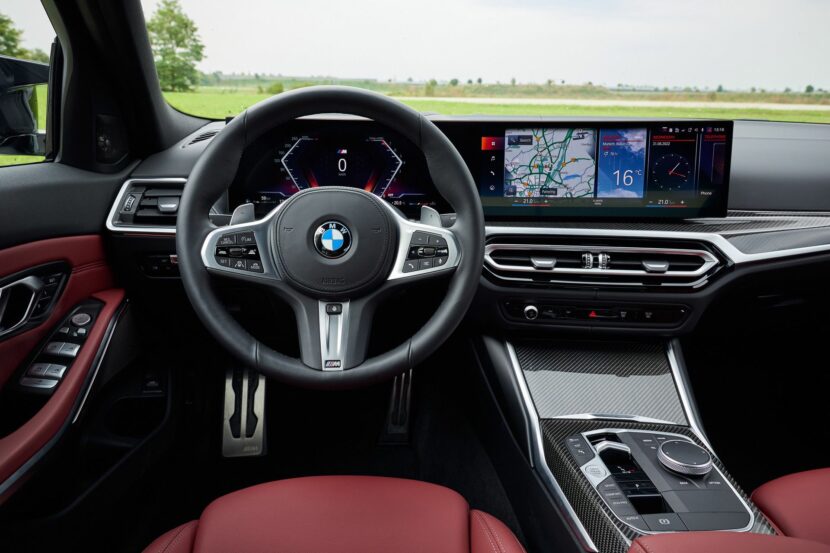 While the exterior changes are mild, the cabin’s updates are not. Long gone is iDrive 7 and its smaller LCD screens, and in is a large curved display powered iDrive 8. For the most part, the 3 Series Facelift gets the same interior as the BMW i4. But unlike the i4, the 2023 3 Series ditches the old and beefy gear shifter for the iX’s toggle switch. A subtle update to the interior is one that does make a significant difference and that’s the piece of dash trim that’s now taller, more sculpted, and more premium looking than in the pre-facelift.

So in my opinion, BMW managed to achieve a great balance between updating the interior to their latest standards while taking a fairly conservative design approach on the outside. It’s a design facelift that should please a lot of BMW’s customers, while there will still be pundits complaining about the lack of the physical AC buttons, or about the overwhelming large display. 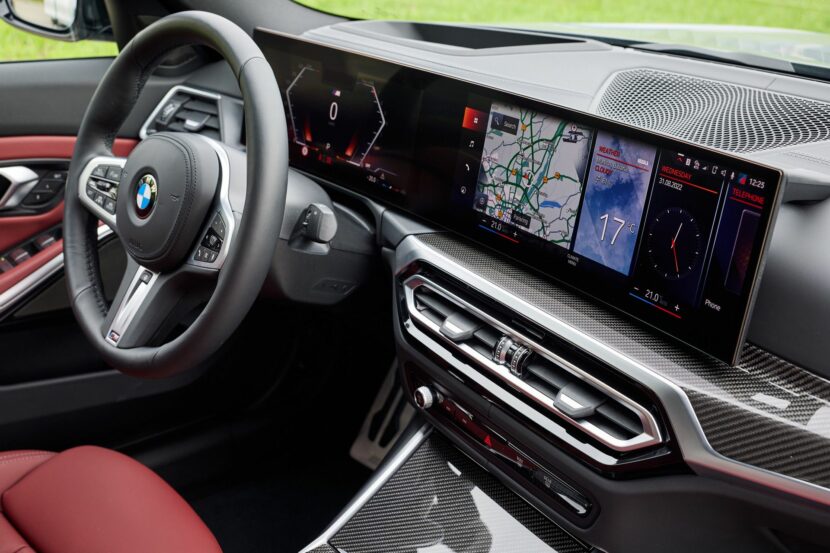 With 16 million units sold since its debut in 1975 (1.1 million of the current generation), the 3 Series is arguably the brand’s most important product. The main markets are China (over 50% thanks to the long-wheelbase), Germany (10%) and United States (7%). Of course, the sedan takes the majority of the global share (80%), while Germany’s preference for 3 Series tourings is overwhelming – 85% percent. 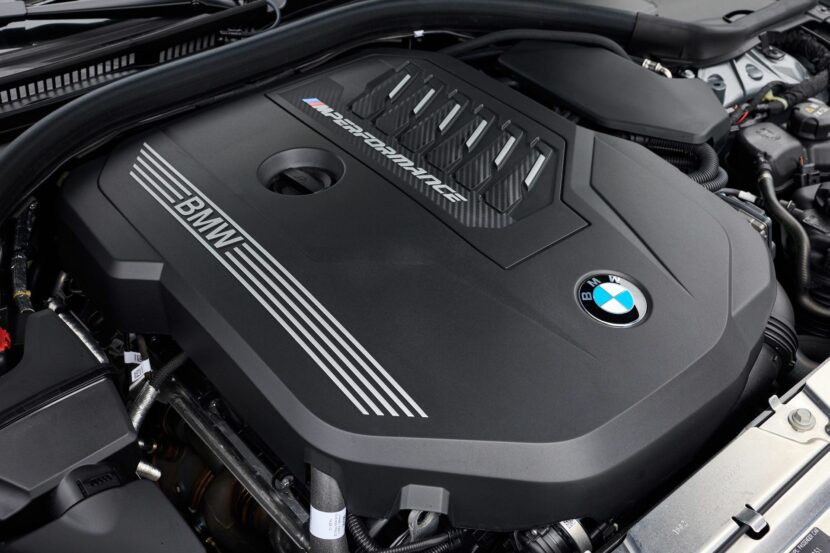 It’s also no secret that the BMW M340i Sedan is one of the most popular 3 Series offerings. And certainly, one of our favorite BMWs. We’ve praised the M340i in all of our previous reviews, citing the glorious B58 engine and the driving experience worthy of an M badge. So can BMW improve an already great product? It turns out that even a small change to the engine is enough to move the needle.

The 2023 BMW M340i now features a mild-hybrid technology providing a temporary 11 horsepower boost. The inline-six 3.0-liter unit still generates 374 horsepower (382 hp in the United States) and 500 Newton-meters (369 pound-feet) of torque. As for performance, the sedan does 0 to 62 mph (100 km/h) in 4.1 seconds while being electronically capped at 155 mph (250 km/h). But is the 48 volt mild-hybrid having a real life impact on the driving experience? 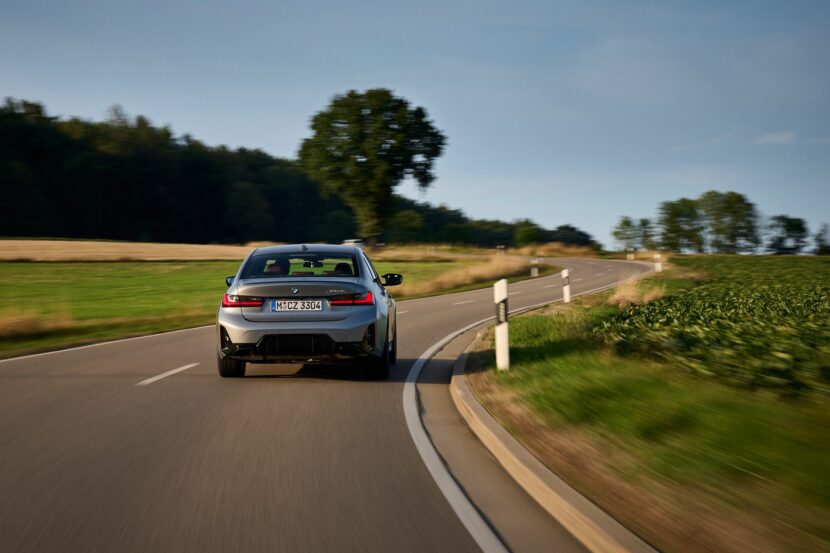 Today’s driving route starts off north of Munich and will take me onto Bavarian backroads before arriving at the X1’s birthplace in Regensburg. The curvy roads will allow me to test the rear-bias of the xDrive system, as well as the suspension settings over different pavements. Unfortunately, the weather is not on my side, so slippery surfaces are something to take into consideration. As always, I set out in the most comfortable driving mode to experience daily driving scenarios. 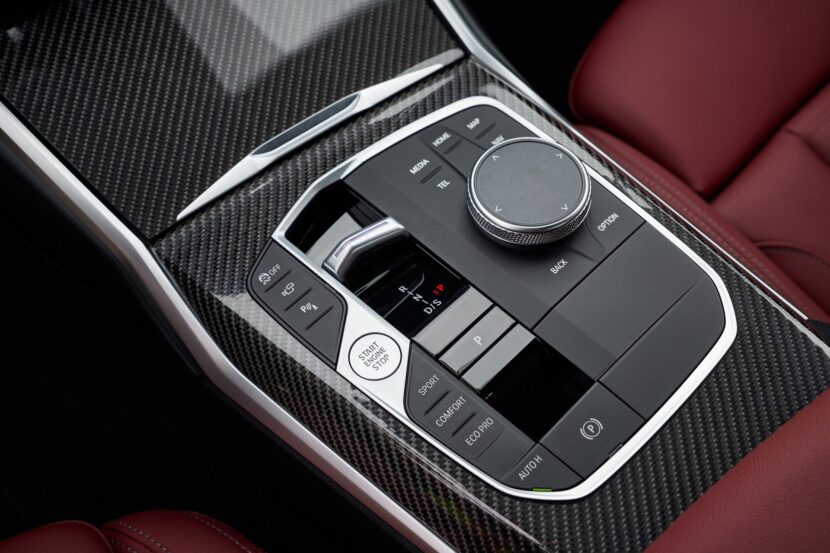 Comfort is one of the driving modes available for the M340i with the M Adaptive Suspension and electronically controlled dampers. The others are ECO, Sport Individual, Sport, Sport Plus and Adaptive. The latter uses data from the car’s sensors and GPS data to predict the steering and suspension settings in different driving situations. The Sport modes can be further customized by adjusting the throttle response, steering input, suspension settings and shifting characteristics.

In Comfort, the 2023 BMW M340i delivers a slightly bouncy ride on straight roads, like on the German Autobahn. The steering input is on the soft side as well, while the throttle mapping is toned down. As with most modern BMWs, the Comfort mode caters to a normal daily driving routine. On the other hand, once I switched over to the Adaptive setting, the M340i is a lot more leveled on the road while retaining a smooth ride.

Naturally, the Adaptive mode will adjust the car’s driving characteristics when cornering, but it won’t be a 1-to-1 match to the more aggressive Sport modes. In the end, the Adaptive mode is one of those things you should simply set it and forget about it. 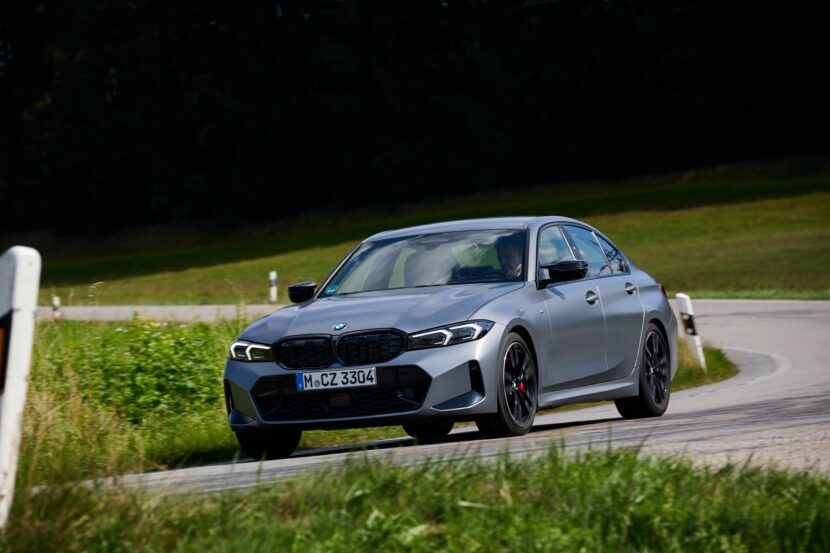 But I didn’t fly all the way to Germany to cruise down the street. My goal is to find out whether the 2023 M340i is still one of the most fun BMWs today. A quick switch in the Sport Plus mode and the M340i Facelift is showing its true colors: a stiffer suspension, tighter steering, aggressive throttle and a more aggressive transmission. The variable steering is now sharper on center, with less of a dead spot, and increased precision. In the BMW M340i, the teeth spacing on the rack in the steering changes more gradually. As I turn the wheel, and the pinion gear turns on the rack, the teeth spacing changes as I turn past a certain point. Therefore, the steering ratio becomes faster.

When it comes to cornering, I immediately sense a sharper response from the car compared to the Comfort mode. The suspension is also firmer, and in combination with the rear limited slip differential and xDrive system, allows to enter and exit the corners with ease. The body roll is nearly inexistent with the M340i staying composed on its feet. As soon as I turned off the DSC, the rear-end got even more joyful, but not recommended on slippery surfaces. 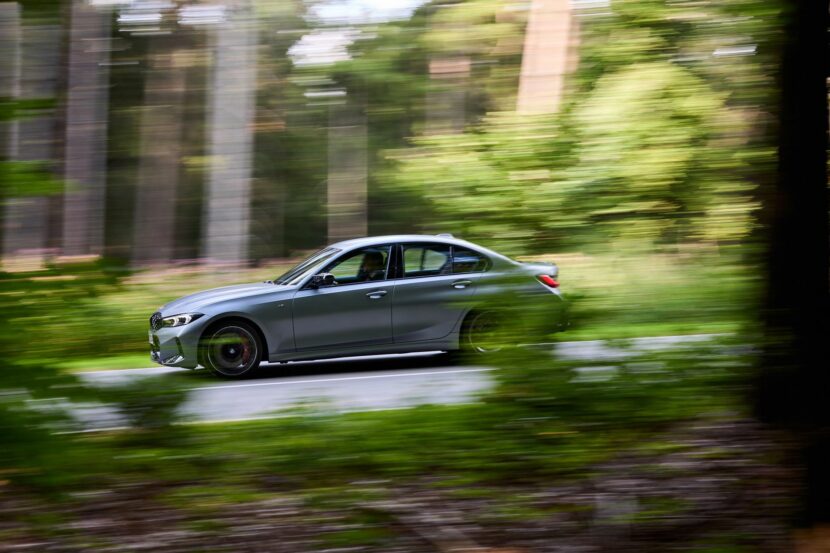 While still in the Sport mode, it’s hard not to notice the precise gear changes, thanks to the ZF 8-speed transmission. The steering is direct and connected to the asphalt, and the M340i xDrive feels quite grippy, thanks to the Michelin PS4S tires. Of course, these tires perform even better on dry surfaces.

The extra 11 horsepower from the second generation 48 volt mild-hybrid system might not be immediately noticeable, but in tight overtaking situations, they make a difference. It also helps reduce the fuel consumption and the much-hated turbo latency. In addition to that, the 48 V generator allows the car to shut down the engine more silently and to start it more quickly than before, improving even more the start-stop functionality. When the vehicle is softly decelerating, the combustion engine can be switched off so that it can be replaced by the electric generator itself. 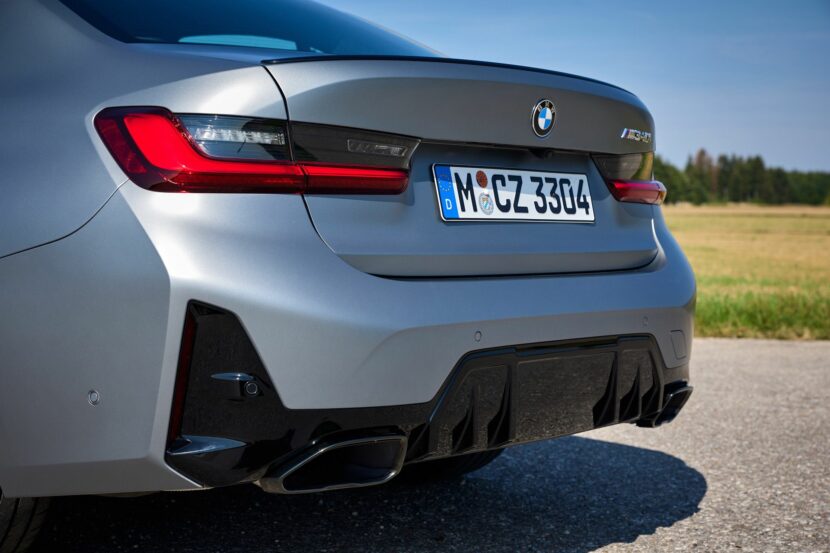 There is also an M Sprint Function which combines several settings into one. If you overtake and quickly need all the power, you pull back on the left paddle shifter for one second, then the car drops to the lowest viable gear and the sprint function kicks in.

The M Sport exhaust with flap control is also standard on the BMW M340i models, but unfortunately, the European variants still get the Otto Particulate Filter (OPF). Therefore, the sound lacks the excitement of the U.S. B58-powered models. Of course, you get the Active Sound inside the car so the blurbs are accentuated and will deliver a decent sound for most customers. 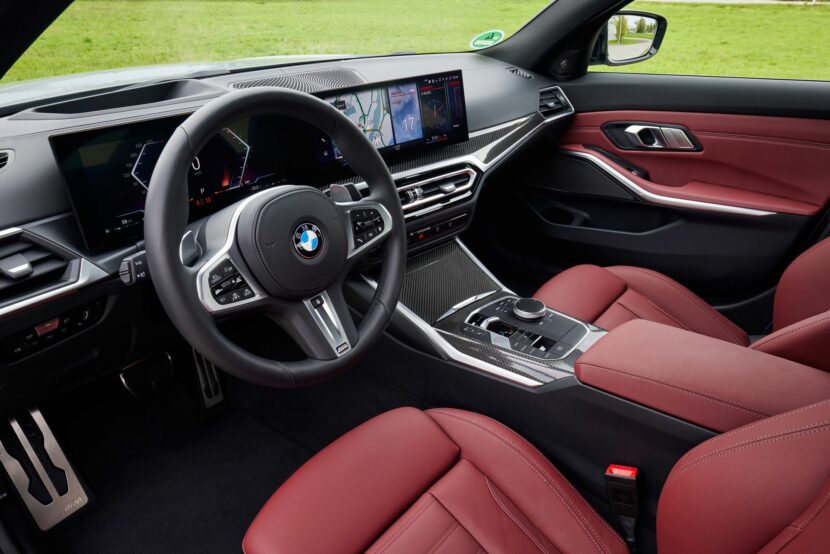 The M Sport steering wheel is the same as ever: beefy and covered in high quality leather. The M Sport seats are also superb, thanks to their side support, hugging your body during spirited drives. The iDrive 8 and curved display is a hit or miss. While I absolutely enjoy the more premium look of the large LCD displays, powered by a highly customizable infotainment system, I do miss the physical buttons on the dashboard. Accessing basic functions, like adjusting the AC system, is cumbersome and takes additional concentration from the driver. I can see why some customers are not sold on the idea of dropping physical buttons from the design. There is a compromise: a quick swipe from the top of the screen will reveal a series of digital buttons. 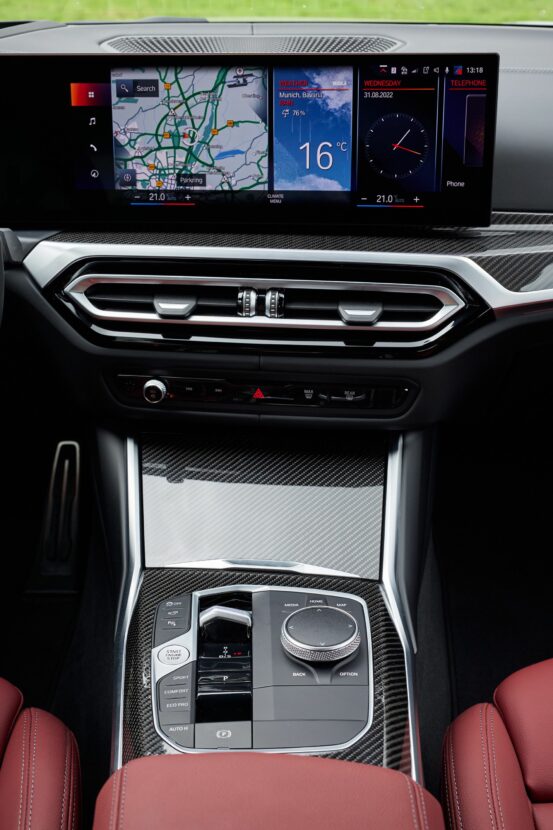 The new toggle shifter gives the central console a cleaner look, but that comes at a cost: the inability to “manually” shift your own gears. And that’s the reason why all BMW 3 Series models come standard with paddle shifters behind the steering wheel. For now, I’m just happy that the iDrive controller stayed in place.

Should I Buy One? 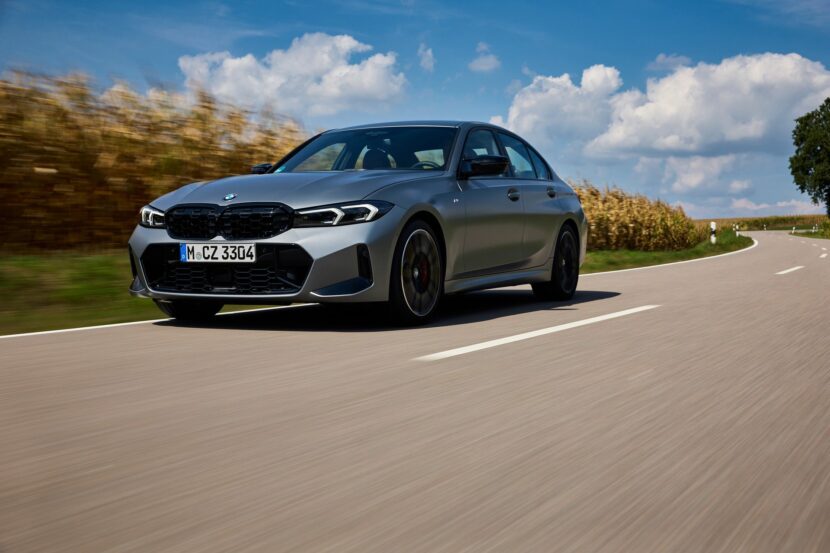 Aside from these little shortcomings, the 2023 BMW M340i is still one of the best products offered by the Bavarians today. It’s such a perfected recipe that it remains to be seen whether BMW can again improve it with a new generation. And to my satisfaction, it’s one of the few products in the segment that offer a rear-wheel drive variant. If you get your hands on either the rear-wheel drive or the xDrive M340i, you won’t be disappointed. It’s a premium car with sports genes, and with a good design.